Home / General / Regulatory changes that may impact you in 2016

Regulatory changes that may impact you in 2016

The much publicized changes with regards to private health insurance are now scheduled to take effect as of 1 February 2016, according to a recent release from the Ministry of Finance and the Comptroller of Insurance. These changes will impact cover for private operations, alternative procedures and consultations in Israel.

The implication to the private Israeli health system is that certain doctors, surgeons and medical procedures that are currently covered by comprehensive private health plans, will no longer be available to plans purchased beyond 1 February 2016. In addition to this, unlike current plans where one can either lock in premiums or will at least be able to predict how the premiums will increase as the policy matures, plans purchased post 1st February 2016 will be subject to changes in both levels of cover and cost.

What are the proposed changes? 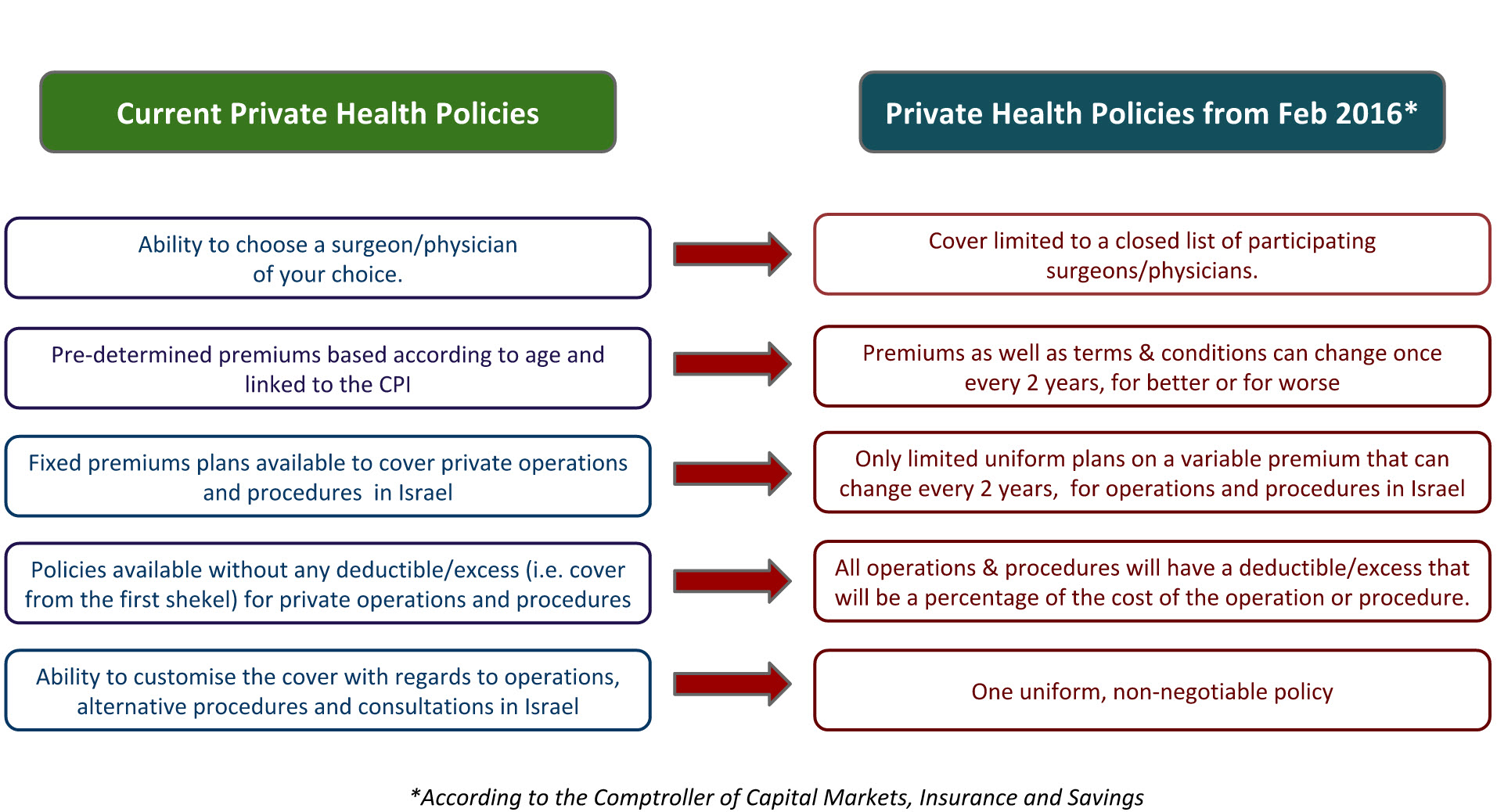 It is important to contact your insurance agent or find one that you trust, and discuss the private health insurance options available to you, taking into consideration your current health status as well as other personal particulars. There are a range of surgery plans which vary in the cost of premium and level of coverage.

According to a recent proposal by the Comptroller of Insurance, as of 1st January 2016, it will no longer be possible to purchase a lump sum life insurance policy at a fixed premium.

Whilst lump sum life insurance policies and monthly stipend policies at a variable rate will still be available, the advantages to purchasing a fixed premium life insurance policy could save you thousands of shekels in the long term. Despite being more expensive initially, the premiums remain the same over the life of the policy and after a certain period of time prove to be more cost efficient than the variable premium policies. This is mainly true for those entering a policy at a younger age.

Below are comparative tables showing the saving in premiums between variable rate vs a fixed rate over a specific number of years. 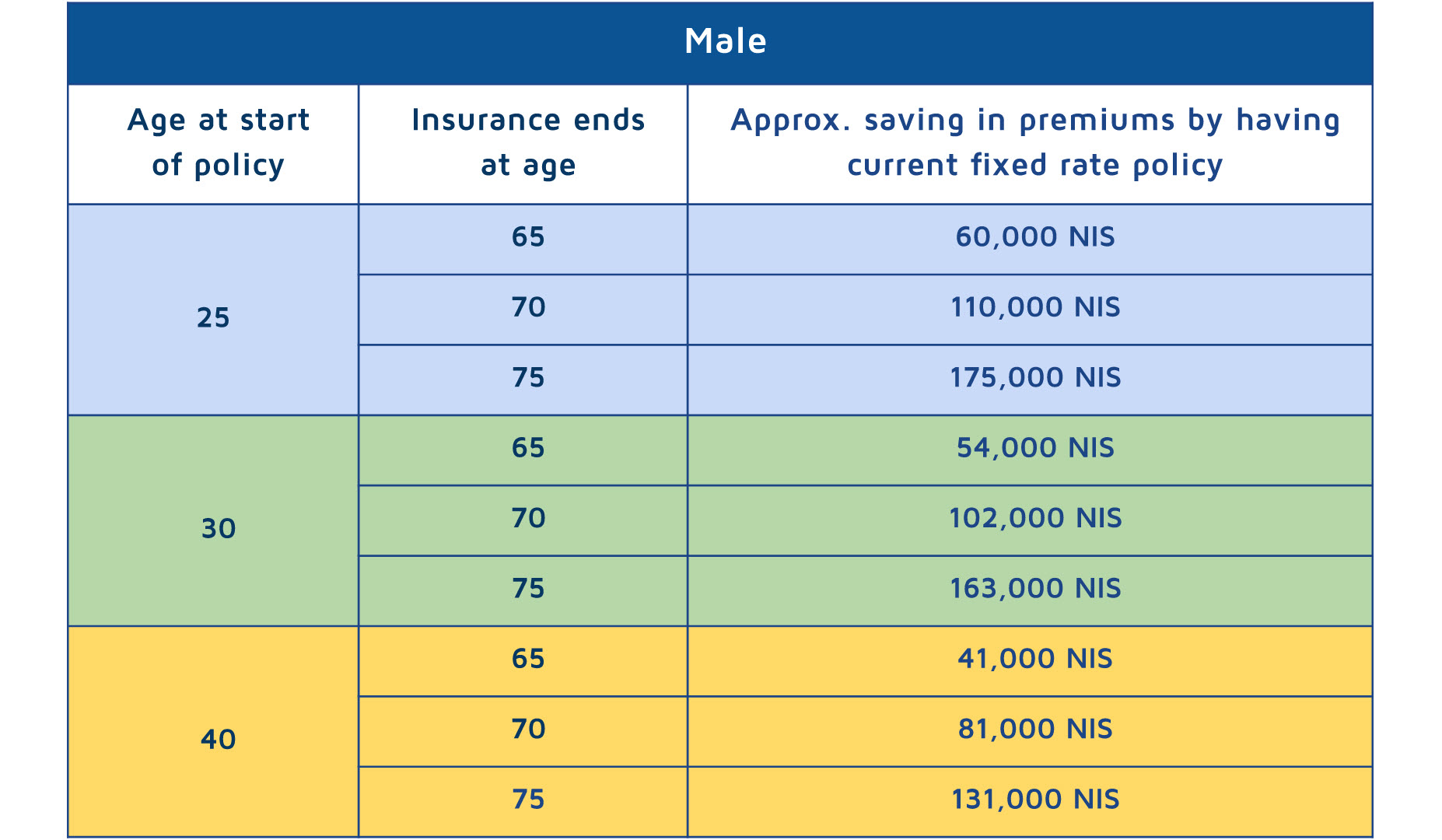 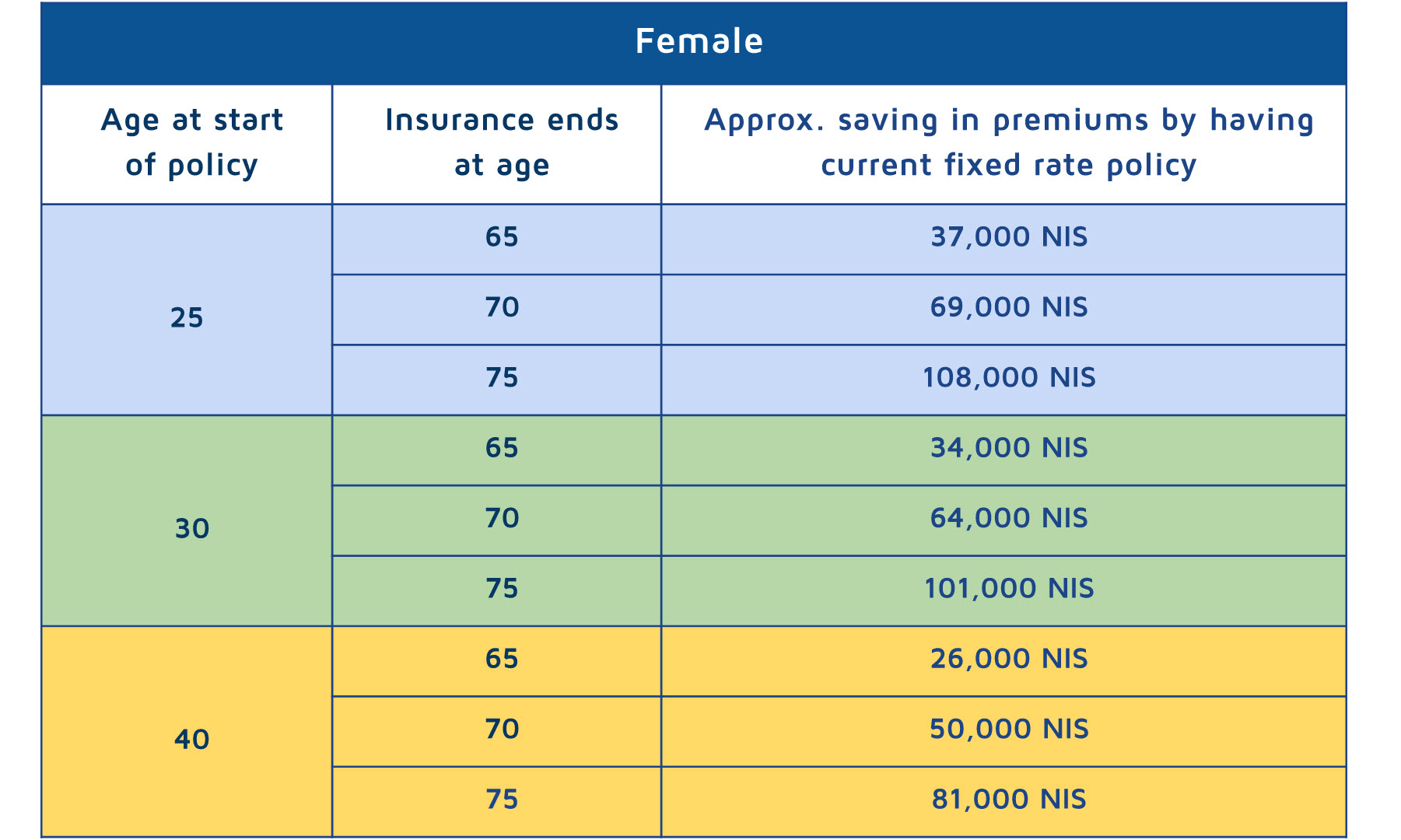 As of 1st February 2016, there will be changes to the Kupat Cholim Siudi policies that will ensure that all Kupot will offer the same uniform plan. At present, if someone wants to switch Kupat Cholim they can do so. However, it is not possible to transfer the siudi plan from the old to the new Kupa as the terms and conditions of each plan are different. Upon switching Kupot one has to sign up to the relevant siudi component with fresh underwriting.

By making the siudi plans the same across all Kupot, the existing policy will be transferrable, preventing the problem that people with pre-existing health conditions currently face when switching Kupat Cholim.

In addition, all collective policies offered by various associations, companies and organisations will also end by 1st February 2016.

The implication of collective plans coming to an end means that many people who once had coverage, will now have their policies cancelled despite paying premium for a number of years. It is important to investigate the best way to maintain appropriate cover considering either private plans or those offered by the Kupot, or both.

There are also indications that the insurance companies may raise the premiums for Siudi policies sold as of 2016, so considering the options before the year end may save a person hundreds of shekel a year.

The need for insurance remains the same irrespective of the proposed changes. As a result, it is advisable to sit with an insurance professional to gain a complete financial / insurance overview of plans in light of the changes and their implications for both the immediate and long term future.

*All dates listed above are based on directives provided by the Comptroller of Capital Markets, Insurance & Savings, as of November 2015.

For more information about insurance in Israel, contact us today!

Prioritising your insurance portfolio from a life and health perspective Jan 26, 2017